Omar Khairat is one of the most applauded and laurelled composers and pianists in the Middle East. His touching music has a special and distinctive style. Critics agree: his music is a pioneering effort in bridging the gap between both eastern and western approaches to music.
He succeeded in bringing a western harmonic flair to the classic Arabic music structure.
Persuasive evidence of this can be found on the CD and DVD Egyptian Overture – The Cairo Concert and the DVD Festival of Tolerance.

His musical influences range from Arabic and European classical, Egyptian, African and traditional to jazz, pop and blues. His compositions have found tremendous appeal with the masses, and great respect from the classical music community in Egypt and various other countries. Omar Khairat was born in Cairo and belongs to a family that actively engages in the arts. His uncle Abou Bakr Khairat, a great Egyptian composer and also a renowned architect, was the founder of the Egyptian Conservatory Institution and was its first dean. In 1959 Omar joined the Conservatory in order to study piano with the Italian maestro Vincenzo Carro. Once he got his degrees in piano and musical theory he started composing music for television, cinema and theater. After graduating he continued his studies with Trinity College in London. At the same time he became involved with international popular music and jazz and played the drums for one of the top bands in Cairo, Les Petits Chats. This experience added
another dimension to his musical influences.

His career as a pianist began in 1959, when his various works started to gain recognition from both listeners and critics. His first major work was the music score for the very popular film The Night Of Fatma’’s Arrest. His music score was a hit and was widely applauded by the public. It was the first time in Egypt for a film score to be released on audio cassettes and subsequently became a milestone in the music industry in the Middle East in that particular field.

Omar went on to compose the music score for the famous television drama, Bangles, which was acclaimed by the critics and loved by the masses.
Other works Omar composed include the music for two ballets, The Sorceress And The Magical Perfumes and The Nile, a ballet he composed for the Cairo Opera Ballet Company.
Omar also composed the music for two operettas, A 100 Years Of Cinema and Al Amarna Hill, his great symphonic work Arabian Rhapsody, his famous film scores Uncle Ahmad’s Case, The Sixth Day, The Terrorist, The Forbidden Time, Love Also Dies and Places In The Heart and a lot of scores for television dramas like A Second Meeting, Escape From Prison, This Man, Homes Have Secrets and Spring In The Storm. His most renowned albums are Fatma, Bangles,Miss Hekmat’’s Conscience, Uncle Ahmed’’s Case, The Sorceress And The Magical Perfumes, The Vision, The Second Meeting, A Modern Woman, The sixth of October Panorama and Arabian Rhapsody.

Omar was granted an enormous amount of awards; among them the award for Best Musician in 1989 by the Egyptian Society for Cinema in appreciation of his music score for the film Escape From The Mental Hospital.
The Film Society and the Egyptian Society for Cinema honored him with the Best Musician award for the music of the film Slumber In Honey. Omar Khairat’’s name and popularity have spread over the years and his works, performances and albums are awaited by his fans throughout the Middle East. It’’s about time the rest of the world hears about this great musician. 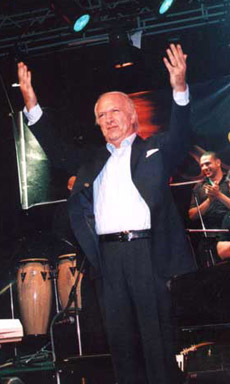